This file explains a number of problems that can cause a slowdown in MainBoss Basic performance. These are general system problems, e.g. difficulties with your disk drives. Dealing with such problems may improve the performance of every program you run, not just MainBoss.

Cleaning up your disk

For optimal performance, the disk that holds your MainBoss data should be as problem-free as possible. Here are a few suggestions to get rid of potential difficulties.

Get rid of "lost" files with CHKDSK.
System crashes and hardware errors may cause files to get "lost". This means that a section of the disk is marked as being in use, but the system no longer knows what it's being used for. That part of the disk isn't part of any known file, so it's just unusable space. If the data is still meaningful, it should be recovered; if not, the space should be freed up so that it can be used again.

You deal with lost space using a Windows command called CHKDSK (pronounced check-disk). CHKDSK completely scans a disk and cleans up any problems found. To execute CHKDSK, open a Command Prompt window and type a command like

When you enter the above command, CHKDSK usually doesn't run immediately. Most disks can only be checked during a system boot. CHKDSK therefore schedules a check to take place the next time you boot.

The checking process usually takes a long time...possibly an hour or more. Therefore, you should only do this when the computer won't be needed for quite a while.

Files recovered by the CHKDSK process are given names like FILE0001.CHK. Sometimes these recovered files contain identifiable data; more often, you won't be able to figure out what the files once were, so you might as well just delete them.

When a file is deleted from a disk, the file's space is freed up for future use. Often this free space occurs between two other files, so you now have a gap on the disk between those files. Your disk ends up with a lot of unused gaps between files. Windows will use those gaps to save other files...but if a file is too big, it has to be broken into pieces small enough to fit in the available gaps. Eventually, many files may end up split into multiple small pieces, decreasing the efficiency of all read and write processes.

Defragmenting cleans up a disk so that files are no longer broken into pieces. To defragment your disk, click the usual Windows Start button, then click Programs -> Accessories -> System Tools -> Disk Defragmenter. This opens the disk defragmenter window. Select a disk from the list of disks. Clicking Analyze will tell you if the disk needs to be defragmented, while Defragment actually defragments the disk.

The file system format of a disk drive determines how files are stored on the drive. On Windows machines, the two most common formats are called FAT32 and NTFS. FAT32 is older than NTFS and less efficient in several ways; converting a disk from FAT32 to NTFS can speed up performance and also save disk space.

To determine the file system format used on a disk, open a Windows Explorer window, expand My Computer, and right-click on the name of the disk drive. In the resulting window, click Properties. This displays a window providing information about the disk; in particular, you'll see a line with File system that tells whether the disk is NTFS or FAT32.

If the disk is FAT32, you can convert it to NTFS; this will speed up performance and will usually save disk space too.

To convert the disk, open a Command Prompt window and type the command

(where you can replace C: with the name of whatever drive needs to be converted).

When you enter the above command, the conversion usually doesn't take place immediately. Most disks can only be converted during a system boot. The conversion is therefore scheduled for the next time you boot.

One frequently-seen reason for slow performance is that you have not defined a TEMP environment variable on all the machines where MainBoss is running. The value of TEMP gives the name of a directory where many programs (including MainBoss) can create temporary files. For each machine in your network, the TEMP variable should specify a directory on the machine itself, rather than on some other machine in the network; otherwise, performance will slow down significantly.

To check whether you have a TEMP environment variable defined, follow these steps:

Your computer has a certain amount of memory (RAM) to store the programs you are running and the data used by those programs. If the computer needs more memory than it actually has, it simulates additional memory by writing to and from disk drives. This simulated memory is called "virtual memory", and using it is much slower than using real memory.

Every computer has to resort to virtual memory once in a while, but if it happens too often, you should consider installing more RAM. Here's a simple test to see if you need more memory:

Slowdowns due to disk errors

To determine if this has happened, follow these steps:

Under normal circumstances, PIO means you need a new disk—the old one has been getting so many hardware errors that it's no longer reliable. In rare cases, however, a disk may somehow get downgraded to PIO even though the disk is still good. You can see if this is the case by following the steps. (For experienced Windows users only!)

If the disk wasn't really having hardware problems, it will stay at the fastest performance setting. Otherwise, it will gradually get downgraded to PIO again; this is a strong sign that the disk really is dying and needs to be replaced.

Note: If you install a new disk drive, it's important to install the "drivers" associated with the drive (usually supplied on a CD in the same package that contains the disk). This CD provides your computer with software that lets Windows read and write to the drive as fast as possible. Without that software, Windows may only be able to read and write to the drive at its slow PIO setting.

Windows comes in various versions. For example, Windows 7 has Home, Professional, and Server versions. One of the main differences between these different versions is how many external connections they allow (to other users and devices like printers). Home allows the fewest, Professional allows more, and Server versions allow as many as you like (although you must buy extra licenses to increase past a certain point).

If you attempt to establish more connections than your system allows, performance is deliberately slowed down. This is Microsoft's way of encouraging you to upgrade your operating system.

The real tip-off that Windows is deliberately slowing you down is often if performance drops noticeably when you try to print something. Since this behavior is built right into Windows, your only options are upgrading your version of Windows or decreasing the number of things you try to do simultaneously. 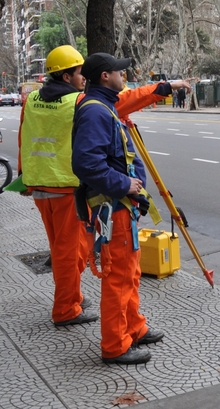 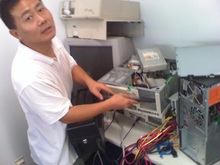