Before beginning the installation process, every computer where MainBoss will run must have the .NET framework installed (version 4.6 or later). If you do not already have an appropriate version of .NET, you can obtain it for free using the standard Windows Update.

MainBoss uses Microsoft SQL Server to read and write all data. SQL Server must be installed at your site before you can begin using MainBoss. Specifically, you must have either:

MainBoss's Web-based modules are implemented using an ASP.NET web application which must run on a Windows system. This means that the web site used by this software must be hosted on a Windows system and must use the IIS web server. We recommend that you use IIS 7 or 7.5 running on either Windows Server 2008 (with Service Pack 2 or later) or R2. (Some sites have managed to run MainBoss's web-based modules under IIS 6 on Windows Server 2003, but we do not provide technical support for the installation or configuration process.)

Important: There are so many different types of cell phones and other mobile devices that we cannot test which ones do or don't work with MainBoss. Furthermore, cell phone service providers sometimes meddle with web transmissions (e.g. by adding advertisements) or else set up connections in ways that prevent devices from using their full capabilities.

Therefore, we cannot list which devices or service providers are suitable for use with MainBoss. If you wish to determine the suitability of a particular device connected through a particular service provider, we would be happy to set up a site that you can use for testing. Contact info@mainboss.com for assistance.

MainBoss 4.2 and later have the necessary report viewer modules included as part of the installation.

However, versions of MainBoss before version 4.2 require Microsoft Report Viewer 2015 to be installed on every system where MainBoss runs. The software may be downloaded free from MICROSOFT REPORT VIEWER 2015 RUNTIME.

We recommend that any computer running MainBoss should have at least dual 2.5 GHz processors with 2 GB of RAM. Ideally, the monitor screen should have a resolution of 1280 by 1024, but you can get away with 1024 by 768 using MainBoss's facilities for hiding detail panels.

If you intend to run MainBoss on multiple computers, we strongly recommend that MainBoss users should belong to a domain. A domain lets MainBoss users sign on with the same login name and password on different computers. You can create a domain with Microsoft Server software, or with a Linux network running Samba.

MainBoss is written in the C# programming language using Thinkage's Extensible Application Framework (XAF). It makes use of Microsoft's .NET and ASP.NET frameworks. Each client program communicates directly with Microsoft SQL Server in order to read and write to a SQL Server database containing MainBoss data. MainBoss uses the same general business logic as MainBoss Basic, e.g. for scheduling preventive maintenance and for dealing with labor/materials on work orders. 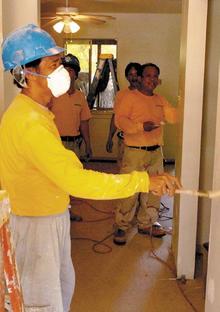