Setting Up ClickOnce for the First Time

The files extracted in Step 4 above include a file named default.htm which you can modify to create the needed web page. Alternatively, you can write your own web page from scratch. 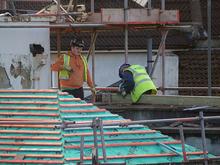