The following scenario describes a kind of problem that should be familiar to anyone working in maintenance. It illustrates exactly how a CMMS can save you time, effort, and resources.

Now how does a good CMMS help in this situation? After Worker A finishes the job the first time, the worker (or a secretary or a supervisor) can use the CMMS to record, "When someone reports a light out in the lobby, call ahead to ask which light it is. If it's the one high up in the ceiling, you'll need an extra-long ladder and special bulb XYZ. There are now 3 XYZ bulbs in Storeroom 1 on Shelf 234."

When Worker B is sent to change the bulb, he gets a work order that contains this information. Therefore, he doesn't have to make three trips to do the work, and your maintenance department doesn't end up with a bunch of extra light bulbs.

There's more. Non-standard light bulbs can be expensive. As time goes on, the price goes up and availability goes down. You might well ask, "Would it be cheaper to change the fixture to a standard bulb rather than stick with what we've got?" A good CMMS helps you quickly determine what you're spending on the current arrangement, so you can decide whether changing the fixture will be more cost-effective.

MainBoss offers an advantage over other CMMS packages: the MainBoss Service Module automatically processes problem reports sent in by email. Instead of phone calls to the maintenance department, someone can report the burnt-out bulb using email. You can even set up web pages that ask the problem-reporter useful questions ("Which light is it?"). From that point on, the service automatically keeps the problem-reporter informed of the job's progress, without maintenance staff having to take any special action.

This service means fewer phone calls, which means your people can work on other things. Automatic feedback means that people who report problems are kept "in the loop", so they're happier with the level of service they receive. 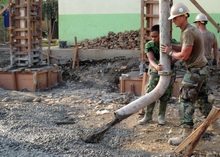