Often, an organization has several different sites, each with its own independent maintenance department. We've seen cases where each department has been allowed to set up their CMMS however they liked...but in our experience, it's better to have all departments choose a consistent approach. Here are some reasons:

Of course, it's not always easy to get multiple departments to agree. If you want to produce a workable set-up for your CMMS, you need a process that every department buys into. Everybody has to be on-side with the final arrangements, and has to understand why certain decisions were made. Otherwise, some departments may not have much enthusiasm for using their CMMS, leading to omissions and poor record-keeping.

What's the best way to get started? Carefully, and with commitment. We've heard of a company that asked each separate department to send one person to a "crash CMMS development program" where matters were to be thrashed out in an intensive week-long session. What naturally happened? Each department sent their most incompetent worker, since those were the people whose absence would cause the least trouble for everyone else. Things went downhill from there...

So what's the answer? Thinking ahead. Planning. Allocating enough time and resources to do a good job. Management must commit to the effort and communicate that commitment to everyone else involved. CMMS can make everyone's job easier...but you only get out what you put in. 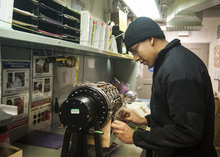